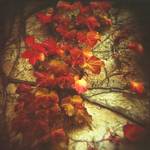 I am drawn to nature, bright colours, geometry, patterns, and textures. Naturally, those are the things captured in most of my photographic work. I make photographic compositions with my eyes, even when I don't have a camera with me. I believe that everything -- even the most mundane of things -- has an artistic side. The artistic side of the mundane is what I specifically aim to capture with my cameras. I love shooting film with various toy and vintage cameras and I'm falling in love with digital photography all over again, now that I own a digital SLR camera.

Born and raised in Indonesia, Firda Beka moved to Canada in 2004 to be with the love of her life. Indonesia and Canada are like night and day. When she just arrived in Canada, everything was new to her and it inspired her to take pictures of things that Canadians seemed to have taken for granted with an old Kodak point-and-shoot digital camera that had been generously donated to her by one of her weblog readers before her first trip to Canada. And so began her journey in the world of photography. She admires and is influenced by the nature photography of Freeman Patterson and the landscape photography of Sherman Hines, both of whom are prominent Canadian photographers.