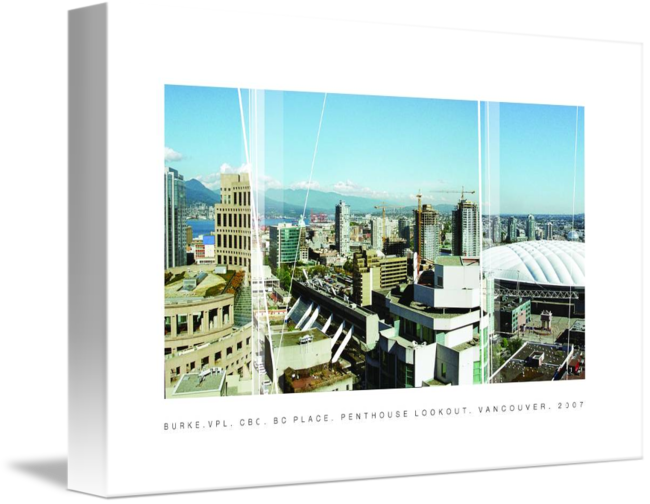 Availablity Usually ships within five business days.
Artist Eric Burke | VANCOUVER
Collection 2007
Description From a birds eye view, Vancouver can be seen as a modern Atlantis, a techno-savvy Eden rising from the blue waters of the Pacific. On a sunny day, you can see forever beyond the urban glimmer of the downtown core, past the sparkling water to mountain peaks capped in white. On days like those, Vancouver is more than a city -- its a shimmering Mecca, as full with promise as the imagination can hold.

Eric Burke | Vancouver features original photographic art of the cityscape, landscape and architecture of Vancouver and the Lower Mainland of British Columbia.

Bio:
Eric Burke’s collection of original photography, illustration and graphic art celebrates Vancouver and the Lower Mainland of British Columbia. Born and raised in Vancouver, Eric has an intimate knowledge of his subject. His art is infused with a pride in and enthusiasm for the culture and landscape of the West Coast. Influenced by pop culture, fashion and surrounding natural and urban scenery, his images offer captured moments in the evolution of the city.

Eric has served as a graphic designer since 1996 and has worked exclusively in Vancouver all his professional life. His formal training includes numerous design and graphics programs from a range of accredited local colleges and universities. Eric has applied his design expertise to a wide variety of businesses, from publishing, real estate marketing and graphic design studios to advertising and marketing agencies. His work has appeared everywhere from brochures, billboards and international publications to greeting cards, vehicles and t-shirts.