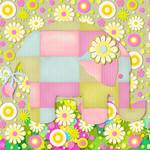 Margaret Le Van, Mt. Pleasant, SC
Member Since August 2009
Artist Statement Margaret Le Van Dominguez grew up in Weston, CT, spending her summers on Nantucket Island. After attending Boston University and The American College for Applied Arts in London, Margaret moved back to Nantucket where she became caught up in the resurgence of decorative painting in the late 1980’s.

During the summer of 1989 Margaret and a friend opened
a store that featured their art and decorative painting services.
Rosa Rugosa on Old North Wharf featured hand painted
furniture and gifts, eventually leading to a long career as a Decorative Artist. For the next 12 years Margaret specialized in Faux Finishes, Hand Painted Furniture and Murals in the CT/NYC area, Midwest and Southeast.

After settling in Charleston, SC in 1996, Margaret began
working with local hand bag designer Mary Norton of
Moo Roo. Creating a collection of hand painted evening
bags and designing digitally printed fabric for tote bags.
During this time her bags appeared on Oprah's “O List”,
NBC Friends and on the arms of several celebrities.

In 2002 Margaret attended The Licensing Show and Surtex
in NYC where she began licensing her artwork to manufacturers
for use on their products.

As a result Margaret has worked with several companies
over the years, creating artwork for products in Home Décor, tabletop,
prints, gifts and collectible figurines sold in stores throughout the U.S.

Recently, she has expanded her work to include Children. Writing
and illustrating 3 books she hopes to have published. And designing
characters, apparel, room décor and fashion accessories for children and tweens .