Availablity Usually ships within five business days.
Artist Rachel Verdi
Collection AngelicRealmTransmissions
Description The essence of the Mandala is to stimulate the process of invocation, the call within and awakening to existence of the spiritual force within the contemplator. Adi Shakti means the primal original power, and the divine feminine aspect. This is represented by the Sikh symbol; the Khanda, in the center. The circle in the center of the Khanda is the Chakra, symbolizing infinity and a reminder that Gods infinite nature has no beginning or end. The double-edged central dagger represents the straight and narrow path of righteousness, the razors edge that cuts both ways. Whatever you do to others you are actually doing to your Self. The two Kirpans, the curved single-edged knives on both sides represent the negative and positive mind polarities which can be balanced through the neutral mind. The Khanda contains the cosmos within it, representing the fifth element ether, which is literally contained within your DNA, penetrates all things, and holds the akashic records. Swirling out and back inward toward the first Chakra element, you are taken through fire, water, and finally earth, where Green Man greets you with a warm presence, symbolizing rebirth, as well as death, correlating to Sa-Ta-Na-Ma, a mantra translating to Infinity-Life-Death-Rebirth. The four gates laden in gold pointing in the four directions, North, East, South and West, represent shifts into other realities of consciousness. Within each gate is the symbol of the triple spiral, or Triskele, a symbol for gold, also representing an ancient Triple Goddess of the Celts, Brighid, whose name is derived from the Celtic word 'brig', meaning, 'exalted one'. Brighid was the patron of poets and bards, as well as healers and magicians. The Mandala's encapsulating outer circle is the moon, symbolizing the divine feminine and intuition, as well as our process of transformation we must undergo before being able to enter the sacred territory within. The lotus flowers pointing toward the corners represent rebi 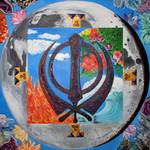 Rachel Verdi, Rescue, CA
Member Since November 2013
Artist Statement ​In this dimension you'll find Rachel painting, writing, practicing alchemy, meditating, exploring nature and tending to mother earth by providing healing. Her art and healing practices are inspired by her inner spiritual journey and its outer macro-cosmic effects.  A force comes through her work and she is merely the conduit, the tool to display a magical realm we are all a part of that is foreign, yet familiar and connected to everything.

Through her studies of Kundalini yoga, Reiki, Alchemy, Hermeticism, Druid traditions, and a gentle curiosity for all aspects of life, she has come to understand this force that exists within all of us, which connects us, making us one with each other and the Divine.  Rachel's gift to you within each painting or healing remedy is the pure light energy she instills into them which manifests by intriguing the spirit and healing the soul, awakening us to who we really are.
Community
Comments
Catalog Details
Product No 5909538
Subjects Buddhism, Celtic, Indian, Irish, Magic Realism, Mythology, Philosophical, Science Fiction & Fantasy, Space, Spiritual & Religious, World Culture
Style Classical
Medium
Tags #FiveElements, #LOTUS, #TheFourGates, #Triskele, #alchemy, #buddha, #crystals, #enlightenment, #gold, #greenman, #hermeticism, #khanda, #kundalini, #mandala, #moon, #spiritualawakening, #yogawest, Rachel, Verdi