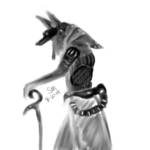 Growing up my sister decided to have some fun with everyone and read our palms to see our future. I was no more then 14 maybe younger and her prediction was this: that I would marry a good man, but we would not have any children, other then the children from his previous relationship. She was half right. I married a wonderful man who is hard working and kind, that loves me deeply, and she was right in that we would not have children, but she was wrong about him having kids from a previous relationship. Now married to this wonderful man 14 years with no luck of having a child. Her other prediction was that I would only be able to paint and draw as a hobby, that nothing would ever come of it. This crushed my dream but it also made me want to prove her wrong. Though now at the age of 32 and I have yet to sell one thing i have drawn or painted or photographed I am starting to believe she may have been right about that part as well. I want so much to prove that i am more then what people expect me to be.

Growing up I was called stupid, four eyes, diseased because i have psoriasis ( and blood disease that causes me to form new skin faster then normal people), I was called fat and ugly. I had to toughen up though and brush off the taunts and threats. Worst of all though they mostly came from my older brother.

I believe everyone should be more tolerant towards other people. You don't have to like who they are, just stop hating.

I have always been more effected by the happiness, joy, loss, and sadness of other people. So much so my heart aches for those in pain, my heart leaps with joy for those who are happy, but mostly I feel the suffering of lost souls, the people just trying to find there place in this world, only to be met with sorrow and pain of the hate so many people carry in their hearts.

How I see myself: I know I am nothing special and at the moment my life holds no meaning in this world, but even if I can not see where I am meant to be I know there must be a place for me as well. Please do not get me wrong, I love my husband and I love being his wife, but there just has to be something more for me then a house wife with no children to raise.
I see myself as uninspired, not talented in the least, a waste of space on this earth, useless. I think sometimes, "whats the point to this life of waking up everyday to an empty house, spending merely minutes with my husband who works 75+ hours a week, to try for a child knowing in my heart its pointless..So whats the point?"

I use to think the world was a beautiful magical world were you could do anything be anything if you just wished it strongly enough, but I have grown and see that the world is a horrible place, where you can only be what you can afford to be, you can only do what money can buy for you, you can only go so far with no one believing in you.....

BUT...I still have hope, hope that this world will one day be what i always dreamed it was, LOVE.