Availablity Usually ships within five business days.
Artist Jason Moore
Collection Palestine
Description Racist graffiti on the gate of a Palestinian house in the Israeli controlled H2 idea of the predominately Arab city of Hebron in the south of the West Bank. 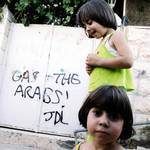 Jason Moore, Swindon
Member Since August 2009
Artist Statement Since graduating from the University of Wales with a Degree in Documentary Photography, Jason Moore has mostly divided his time between working as a freelance photojournalist in the Middle-East and as a professional wedding and commercial photographer in Swindon, Wiltshire and southern England.

His images have been published globally in newspapers and magazines and widely exhibited, notably at the prestigious Frontline Club in London, and in Edinburgh, Jerusalem, and at the Welsh National Eisteddfodd in association with Ffotogallery in Cardiff and the Arts Council of Wales.

In 2005, he was selected as a finalist in the British Journal of Photography Endframe Competition for his photographs documenting the construction of Israel's controversial separation barrier in the West Bank.

More recently, he was Artist in Residence with Create Studios in Swindon documenting the annual conference of the National Association of Local Government Arts Officers and mentoring young photography students.

As well as photographing commercially, he is also currently working on a long-term documentary project exploring Paganism in the United Kingdom.

For weddings, Jason Moore draws on his extensive background and experience in documentary photography to creatively cover your whole day from the Bride getting ready to the end of the reception.