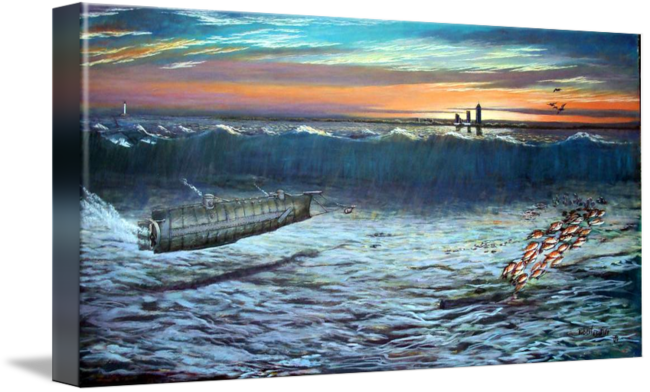 Availablity Usually ships within five business days.
Artist Robert L Butler Jr
Collection Robert_Butler_Jr
Description H. L. Hunley was a submarine of the Confederate States of America that demonstrated both the advantages and the dangers of undersea warfare. The Hunley was the first submarine to sink an enemy warship, although the submarine was also lost following the successful attack. The Confederates lost 32 men in Hunley's career. The submarine was renamed after the death of her inventor, Horace Lawson Hunley, and some time after she had been taken into the Confederate forces at Charleston, South Carolina.Original Acrylic on Archival Canvas painted by Robert Butler Jr. Dimensions are 24' x 48'. The modern-day Mobile, Alabama skyline and the Sand Island Lighthouse are depicted on the horizon.