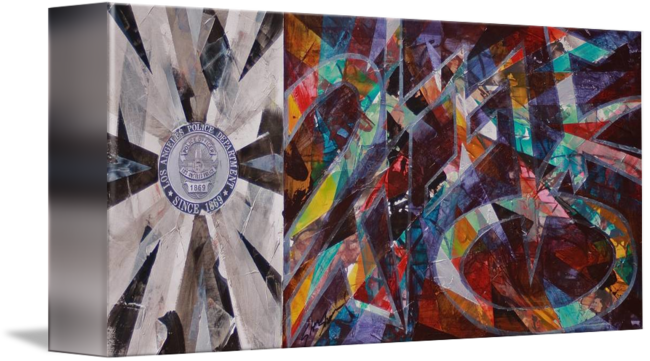 Availablity Usually ships within five business days.
Artist Shawn Shawn
Collection Painting
Description On April 24, 2011, REVOK, one of LA's most notorious graffiti artists was falsely arrested to tarnish the image of MOCA's show 'Art in the Streets' about the 40 year evolution of graffiti. Revok, being one of the main artists displayed was a perfect target. LAPD put his bail at $320,000, which is more than a serial killer. Apparently, LAPD is more focused on art than rape and robbery nowadays.Revok's crew, AWK and MSK worked together to free Revok in a 'Free Revok' campaign selling T-shirts. In 1 month they were able to deposit the minimum to break out Revok.Revok has previously been arrested in Australia for graffiti. Some of his most famous bombing 'tags' were LA highway signs, a downtown slum building and various bridges over highways in LA.Besides tagging, he has developed his graffiti to numerous styles most writers cannot come close to.Each day the exhibition has been out, there have been lines to enter MOCA to see the exhibition. More than 20,000 people came in the first 10 days. Clearly, this is a popular and successful art form. The noriety of the show caused the Brooklyn museum to back out of their sponsorship; they claim they had 'no money', but with a minimum of (20,000 visitors x $20 = $40,000) is it really 'out of budget'?Another great observation is there is no graffiti in authoritarian systems such as in the former USSR, China or North Korea. There graffiti was severly charged with years or lifetime confinement. So graffiti in essence, is the true balance between police, property and artistic merit.Revok's website:revok1.com/

MY WORK:
In my work I try to work with a craftsmanship discipline and remain fresh with various techniques. Recently, I developed my angularity style and am branching out into acrylic, which has its advantages and shortfalls to oil.
Community
Comments
Catalog Details
Product No 4466846
Subjects
Style Contemporary
Medium
Tags 2011, Revok, Shawn, abstract, abstractartawards, art, graffiti, lapd, shawnshawn