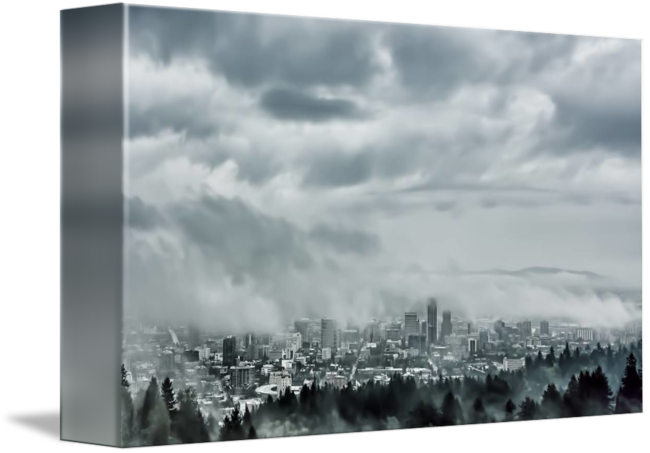 Availablity Usually ships within five business days.
Artist Don Schwartz Platinum Member
Collection Skies
Description A light rain was falling in the early morning hours, on a spring day, in Portland, Oregon.From Wikipedia Online Encyclopedia:Portland is a city located in the U.S. state of Oregon, near the confluence of the Willamette and Columbia rivers. As of the 2010 Census, it had a population of 583,776, estimated to have reached 587,865 in 2012, making it the 28th most populous city in the United States. Portland is Oregon's most populous city, and the third most populous city in the Pacific Northwest region, after Seattle, Washington, and Vancouver, British Columbia. Approximately 2,289,800 people live in the Portland metropolitan area, the 19th most populous MSA in the United States.Located in the Marine west coast climate region, Portland has a climate marked by both warm, dry summers and wet, cool-to-chilly winter days. This climate is ideal for growing roses. For more than a century, Portland has been known as the 'City of Roses', with many rose gardens, most prominently the International Rose Test Garden. The city is also known for its abundant outdoor activities, liberal political values, and beer and coffee enthusiasm. Portland is home to a collection of independent microbreweries, microdistilleries and food carts that contribute to the unofficial but widely utilized slogan 'Keep Portland Weird.'