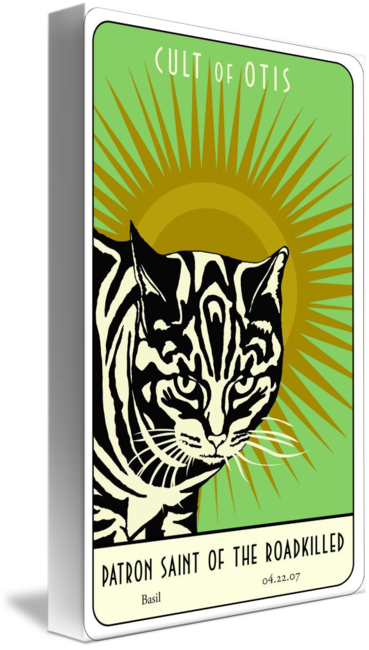 Availablity Usually ships within five business days.
Artist Cult Of Otis
Collection Patron_Saints
Description Basil was one of many cats in Otiss flock that had been captured by an unknown person, neutered and then abandoned back into the wilderness. The tip of his left ear had been cut off so that he would be recognized in the future as a cat that had been neutered. While the surgery prevented him from reproducing, it did nothing to protect him from the dangers of the world. After being run over by a car, he dragged himself beneath the low-hanging branches of a cedar tree at the side of the road and died.Saint Basil reminds cat guardians that their feline charges, including those that are feral, should never be allowed to roam freely, crossing roads and putting themselves in great danger. Saint Basil watches over those who keep cats safely confined in enclosures or through the use of a leash and harness when they are outdoors. He also watches over cats that are allowed to roam freely and cross roads. He cannot protect these cats from cars, but he can at least be with them when they are hit so they do not die alone and afraid as he did.