Availablity Usually ships within five business days.
Artist Steve Purnell Platinum Member
Collection SmokeArt
Description Photographing smoke trails gives some weird and wonderful shapes and patterns. When this is combined with photoshop, it is surprising what can be achieved. An abstract smoke trail image. Original photograph manipulated and coloured in photoshop. This image has been given a 3D cube effect 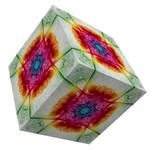