Availablity Usually ships within five business days.
Artist Sally McLean
Collection OtherStuff
Description This image of Tweedledum and Tweedledee from Lewis' Carroll's 'Alice In Wonderland' by Sir John Tenniel rendered in a grunge design with the lettering 'Tweedledum & Tweedledee' in carnivale style is perfect for any 'Alice In Wonderland' fan and will add a touch of uniqueness to your 'Alice in Wonderland' collection. 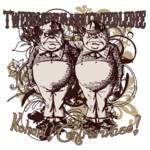 Sally McLean, Melbourne
Member Since July 2008
Artist Statement Actress, screenwriter, director and playwright, Sally McLean began her work in the entertainment biz as an actor in her mid-teens and has since performed leading roles in numerous Australian and British film, theatre and television productions.

She has played lead roles in over thirty UK and Australian theatre productions, her most notable being "Annabel's Requiem", "Hamlet", "Romeo & Juliet", "Lovepuke", the professional Australian premier of "I Love You, You're Perfect, Now Change", "The Auxilary", "Chasing Pegasus (a play in ten chords)", "PS I Love You" and the all-female "Macbeth", described as " an utterly convincing performance as the old Scottish King, belying the fact that McLean is not only young and a woman, but also Australian." - Time Out, London.

Film work includes "A Little Rain Must Fall" (UK), "Sleeper", "Just Move Your Lips" (UK), "The Return", "Life of Death" and "Interchange", amongst others.

In addition to her work as an actor, she recently produced the Melbourne and regional seasons of her play "Chasing Pegasus (a play in ten chords)" as writer/director, and is currently producing two independent feature films - "Water Deep" (working title) and "Dalny" (working title) (for which she is also the screenwriter).

In the late 1990's, she created her own film production outfit, Salmac Productions, under the patronage of respected British actor, Sir Nigel Hawthorne, known internationally for his starring role as "Sir Humphrey Appleby" in "Yes, Minister" and "Yes, Prime Minister" and his Oscar nominated performance in the title role of "The Madness Of King George". Her association with Sir Nigel continued until his passing in 2001.

Sally has written and produced three film projects to date, one in the UK ("A Little Rain Must Fall" - selected to screen at the Cannes Film Festival) and two in Melbourne (which she also directed) - "fixNATION" - screened on Foxtel and "Brigit & Benny (a modern faerietale)" - 2005 Cannes Film Festival entrant. As a playwright, in addition to writing and directing her first play, "Chasing Pegasus (a play in ten chords)", she has also written and directed the WW2 play "'Till The Boys Come Home" (workshop version), and is at present immersed in her current works-in-progress "Bayonets and Bully Beef", excerpts from which were performed under her direction at the Victorian Arts Centre, Melbourne in July 2005 and the fully-staged version of "Till The Boys Come Home", due to be staged in Melbourne in May 2009.