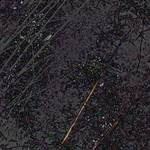 I have degrees in mathematics, fine art, and computer science. My work often involves the intersection of three.

In some previous life I worked at hard at being an artist but didn't really like anything I made. (I was interested in printmaking, drawing, the art of the symbolists, and graphic arts.) I ran out of money and ended up working 20 years at Adobe Systems. Returning to my first love, mathematics, I worked on arcane problems for them that have surfaced in various of Adobe's products over the years.

When my son was born, I began carrying around a camera in my pocket, because he was funny and because one could now carry a decent camera in ones pocket. Having a camera around at all times became a habit, and I found I was becoming a photographer again, but with a different approach. I have never gone back to going out on photo missions looking for shots. Now I just let life happen and have the camera ready when something interesting appears.

I put my photos on a screen saver on my computer at work. People began ignoring me and looking at the screen when they came to talk. So at some point a started uploading these things to for people to look at.

Recently I have started working on developing some images from my mathematical researches of years past into full blown mediations on the boundary between mind bending chaos and mind numbing order. Some of these are pictures of things I don't think anybody has ever seen before. (See mathematical images gallery.) There will be more to come here but they take time...
Community
Comments
Catalog Details
Product No 2288239
Subjects
Style
Medium
Tags Stephen, abstract, bamboo, schiller, texture