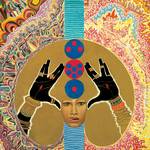 Mati settled in Deia in the early 80’s, working from his studio and home up in the northern costal mountains, surrounded by the landscapes that he so admired and painted in such astonishing detail as may be seen in his collection of “real-estate paintings” or “inscapes”. Also during these years, he created a number of “improved paintings” a collection that he had begun in the 1970’s, where he would purchase unwanted paintings in thrift stores and flea markets and bring them back to life by “improving” or recycling them, adding his own brush strokes to the originals, giving them a new meaning, often humorous, and if placed, always sharing both artists signatures.
Community
Comments
Catalog Details
Product No 4435264
Subjects Jazz, Music, Spiritual & Religious, Spirituality
Style Fine Art
Medium
Tags 60's, Klarwein, Mati, abdul, art, fine, mati, psychodelic, surrealism