Availablity Usually ships within five business days.
Artist Nicholas Charles Pro Member
Collection Wildlife
Description This is an exploration of how much emotion I could evoke with a limited palette of colors. 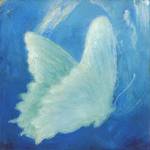 Nicholas Charles, Asheville, NC
Member Since October 2010
Artist Statement Nicholas Charles was born in Los Angeles, California in 1958.
At the age of sixteen he moved to Costa Rica where he was introduced to painting and various other crafts by well known Costa Rican artist Max Rojas.
After his studies he went to work as a lobster diver, sailor and carpenter.

Nicholas been dedicated to making art and composing music since the mid 80's.
He has alternated between living in Costa Rica and the US.
He was a member of the Portland Saturday Market for three years and has participated in many art festivals and group and solo exhibitions in both Costa Rica and the US.