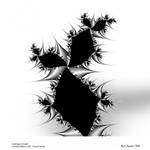 A self-taught artist, he began his studies in the visual arts and photography in the 1960s, developing numerous studies and exposing his works in various collectives, among them: –

At the same opportunity, he received an invitation to submit works for possible acquisition from curator Elaine L. Johnson of the Museum of Modern Art – MOMA, NY, during a visit to Brazil.

From 1970 onwards, for professional reasons, he was forced to leave the Exhibitions Circuits. Since then, he has become interested in digital art, developing, with the aid of the computer, numerous experimental graphic works, thus going through various forms of expression.

Recently, the art critic Vera Pedrosa on the subject of his works
exposed on the web so said, in a message sent to a mutual friend:

I have carefully considered the various lines of work of your friend Henrique, who stand out from detail and precision, I suppose, associated with their formation and scientific aspects. From the outset, without seeing the curriculum, I thought that the work had arisen less from the artistic experience – because it lacked the “painterly” element – that of the visual games and the cerebral perceptions to focus on the new modalities of graphic, cinematographic, Advertising, multimedia techniques – or those that flow from or feed each other. When I saw the curriculum, I understood that it was from the woodcut, and therefore from a manual one, and that his adventure would perhaps be to confer humankind and perhaps warmth to computer creation.
Since I do not know the support of the works and only saw them on the computer, I do not know how I would react to them. Would it be printed on paper or other media? Designed? Luminous, immense? Or boxes to be placed on a table, a wall?
In any case, there is an extraordinary virtuosity and, it seems to me, great beauty, refinement and variety in geometric experiences (boxes, boxes, effects, spheres). I have no idea how he can get these results, which I felt like the most interesting among the various series.

The color experiments that look like cubist abstractions are beautiful, but they would probably be more warm and immediacy if they were really hand-painted screens. If they are printed, I think they will look like reproductions. If they are projected, the effect would be another, which I do not know.
I was not attracted by the interference of color photographs with human models, unless they are studies for application in films, videos, documentaries or other “installations”. The other colorful works with flowers and other themes have something very current, very “now”, pop and manga, something that is on the crest of the wave (the current work of Vic Muniz, Beatriz Milhazes) but that I see more as a commercial aspect , For application in objects, fabrics, clothes, decorative panels, which as an “artistic” research. Although traditional fabrics and ethnic utilities are so often
Community
Comments
Catalog Details
Product No 6349105
Subjects
Style
Medium
Tags Azevedo, Henrique