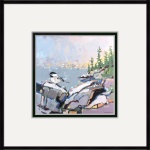 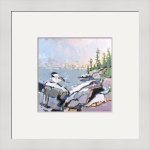 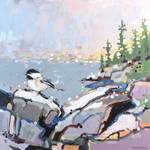 In the early 2000’s I worked for years in Antarctica with the National Science Foundation where I developed my knowledge of important climate related experiments. Currently, I’m a member of the Twin Ports Art Science Collaborative and my work has been influenced by researchers from Lake Superior and the SPRUCE climate change project in the Marcell Experimental Forest of Northern Minnesota. Now, more than ever, the implications of human actions in a changing landscape are on the tip of everyone’s tongue. My recent paintings make scientific data such as this clearer and, most importantly, inspire audiences to learn what can be done to change course.
Community
Comments
Catalog Details
Product No 6196069
Subjects Animals, Beach and Ocean, Birds, Landscape
Style Landscape
Medium
Tags Adam, Swanson, bird, chickadee, lake, landscape, rocks, shoreline, superior, trees