Availablity Usually ships within five business days.
Artist David Bassinder
Collection Streetlife
Description this work was originally created using a marker-pen with a phat chisel tip, it forms part of a series that iv named Funk Face.I had a lot or fun drawing these faces, each face as a different expression, some happy others sad, confused etc...I really enjoy drawing with different media. Keeps things fresh... 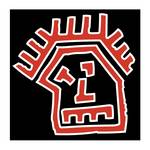 David Bassinder, Dudley, U.K
Member Since December 2006
Artist Statement Hi People, my name is David i live in a area known as Dudley in the West Midlands U.K. The area is also called the Black Country because of it's industrial past. At one time there was loads of factories that produced chains, nails, etc.. it's claim to fame is that it made the anchor for the Titanic...went down a treat...lol. My town also as a castle Built by the Norman's i do belive...and a Zoo..been there a few times...woudnt let me out.lol.
After finishing University David as established Himself as a successful artist in the public realm he as helped produce large scale murals in and around the local area. The most recent being at the Russells Hall Hospital an Dudley.

He also conducts workshops in Streetart and Graffiti teaching students about the positive aspects of these artforms. Working for local councils including Dudley, Walsall, Sandwell, as well as conducting workshops at The New Wallsall Art Gallery, David considers art can be a force for positive change in society.
Fine Art and illustration have helped shape Davids Creative Outlook, along with graffiti and skateboard culture.