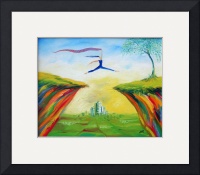 Availablity Usually ships within five business days.
Artist Jane Evershed Platinum Member
Collection GalleryJane
Description A woman takes a great leap of faith from one side of a cliff to over the chasm to the other. Leap like a lunatic!