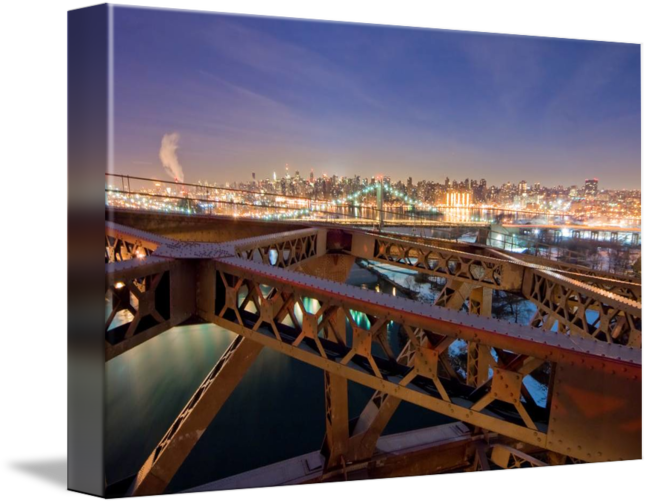 Availablity Usually ships within five business days.
Artist Steve Duncan
Collection Bridges
Description Hellgate Bridge, View from Girders looking toward Manhattan, New York City, 2006Looking south from the top of the Hellgate Bridge toward Manhattan.The massive Hellgate Bridge, built in 1916, was the longest steel-arch bridge in the world, and it was built to support a load as heavy as sixty 200-ton locomotives. (With such a load, it was calculated that the bridge would flex only three inches at the center.) It remains the strongest bridge in New York, and its estimated that, if people were to suddenly disappear from the earth, the Hellgate Bridge would last longer than any other structure in New York City, and perhaps as much as a thousand years longer than the Brooklyn Bridge.

Steve Duncan, Brooklyn, NY
Member Since February 2010
Artist Statement As an urban historian & photographer, I try to peel back the layers of a city to see what's underneath. From the tops of bridges to the depths of sewer tunnels, these explorations of the urban environment help me puzzle together the interconnected, multi-dimensional history and complexity of the world's great cities.
Community
Comments
Catalog Details
Product No 3041110
Subjects
Style
Medium
Tags Duncan, Steve