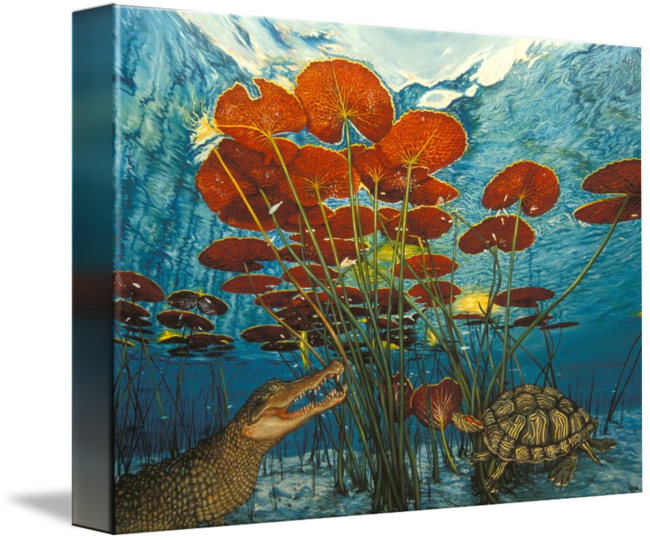 Availablity Usually ships within five business days.
Artist Elena Maza
Collection Gardenbeauty
Description A turtle swimming in a pond runs across an alligator under the waterlily pads. The red tint of the lily pads against the aquamarine water makes a highly decorative setting for the dramatic encounter between the two animals.

Elena Maza, Front Royal, VA
Member Since December 2007
Artist Statement Elena was born in Havana, Cuba, and came to the U.S. in 1961, living in New Mexico with a foster family for a year until her own family was able to leave. A resident of the Washington, D.C. area since then, she studied architecture at Catholic University, where she gained her first exposure to the local arts scene working with a group of students at the Washington Gallery of Modern Art. She started painting in 1970 while working as an architectural draftswoman and designer, and studied later at the Corcoran School of Art. Her paintings have been exhibited internationally in juried and invitational shows. She has received a number of awards, including an individual artist grant from Montgomery county in 1994, and has been curator for art exhibitions locally and in Delaware, where Collage of Cultures: Many Visions One Community received a Governor's award. A book about Elena’s life, "Embracing America: A Cuban Exile Comes of Age," by Margaret Paris, was published by the University Presses of Florida in 2002.
Community
Comments
Catalog Details
Product No 673924
Subjects Animals, Landscape, Reptiles, Tropical
Style Landscape
Medium
Tags Elena, Maza, alligator, aquamarine, blue, red leaves, red-eared slider, turtle, underwater, waterlily, waterlily pads