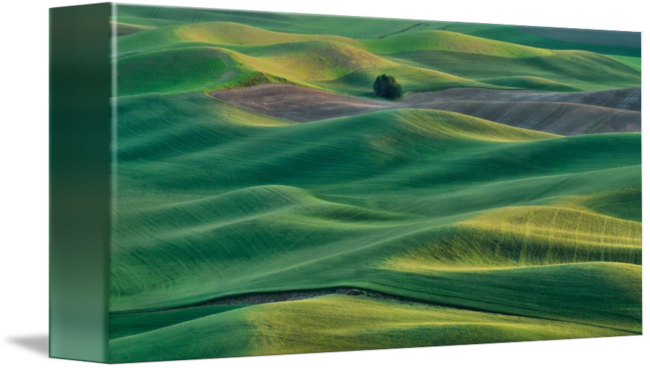 Availablity Usually ships within five business days.
Artist Don Schwartz Platinum Member
Collection CountryRoads
Description The mesmerizing landscape of the Palouse region in Eastern Washington offers a palette of light and color. From Wikipedia Online Encyclopedia: The Palouse (/plus/ p-looss) is a region of the northwestern United States, encompassing parts of southeastern Washington, north central Idaho and, in some definitions, extending south into northeast Oregon. It is a major agricultural area, primarily producing wheat and legumes. Situated about 160 miles (260 km) north of the Oregon Trail, the region experienced rapid growth in the late 19th century, and at one time, the population of the Palouse surpassed even that of the Puget Sound area as the most populous region of the state. The region is home to two land grant universities, the University of Idaho in Moscow and Washington State University in Pullman. Located just eight miles (13 km) apart, both schools opened in the early 1890s.