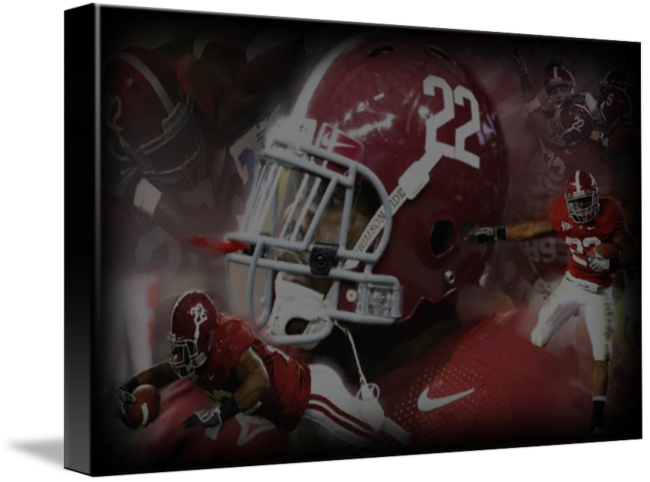 Availablity Usually ships within five business days.
Artist Joseph Hargrave
Collection Alabama
Description Mark Ingram, Jr. is an American football player who currently plays running back for the Alabama Crimson Tide. Ingram, winner of the 2009 Heisman Trophy, is the son of former NFL wide receiver Mark Ingram, Sr.Ingram played behind Glen Coffee his freshman year, and he was selected to the 2008 SEC All-Freshman Team. His team-high 12 touchdowns also set the Alabama freshman school record.In the season opener of the 2009-10 season (Chick-fil-A College Kickoff: #5 Alabama vs #7 Virginia Tech), Ingram was the player of the game with 150 rushing yards, a rushing touchdown, and a receiving touchdown.[13]Through 13 games of the 2009 season, Ingram has rushed for 1,542 yards and 15 touchdowns. He also has 322 receiving yards with 3 touchdowns. On October 17, 2009, in a game against South Carolina, Ingram ran for a career-high 246 yards. He was named SEC Offensive Player of the Week. In the 2009 SEC Championship Game versus the undefeated and top-ranked Florida Gators, Ingram rushed for 113 yards and three touchdowns, while also catching two passes for 76 receiving yards to combine for 189 all-purpose yards. In the game, Ingram also surpassed Bobby Humphrey's single-season rushing record for the Crimson Tide, reaching 1,542 rushing yards for the season.On December 12, Ingram won the Heisman Trophy in the closest vote in the award's 75-year history. Ingram is Alabama's first Heisman winner, the third consecutive sophomore to win the award, and one of two running backs in the decade to win the award, the first being Reggie Bush in 2005. Ingram was also selected to the 2009 All-America Team by the Associated Press and AFCA.

I don't think the Mona Lisa is art ... it is simply a women smiling ... but if you ask my art teacher and millions of other people it is "art" but that is his opinion and it is what it is.
Community
Comments
Catalog Details
Product No 2789713
Subjects Collegiate Sports, Football, Sports & Recreation
Style Generative Art
Medium
Tags Joseph, alabama, auburn, bama, bamamag, college, crimson, football, hargrave, roster, sports, tide