Availablity Usually ships within five business days.
Artist Russ Martin
Collection Walls
Description A small diner in Midtown Manhattan. It is a study in red and orange and squares and rectangles. At that time, I was one of the few fine art color photographers and was represented by the Alonzo Gallery on W. 57th St. 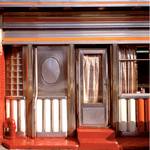 Russ Martin, Hudson Valley
Member Since September 2014
Artist Statement Mr. Martin is a citizen of the USA, having been born in upstate New York, and spending his youth in the small rural village of Clinton. When he was young, professional cameras and a fully equipped darkroom were ever present, his father being a part time professional. About the darkroom, he says, "there was a mystique about "that place. I wanted to know about it. It also seemed like it would be fun to make pictures and sell them to my friends." So, he convinced his father to teach him the basics of photography and darkroom procedures. Thus began a life long career as a fine art photographer. Later, he went on to study fine art photography and earn an MFA degree in the medium. After college, he found employment teaching photography in numerous colleges and high schools while he exhibited his work in New York City and the Tri State area. He is now retired, having done so in 2008, and spends most of his time on photography.

Over the years, Mr. Martin has photographed many different subjects and worked in numerous mediums. In the beginning, he worked exclusively with black and white materials, shooting, developing, and printing in the darkroom. In graduate school, he also concentrated on color, photographing urban subjects, and processing and printing it, when few others were. He has been called "a pioneer of fine art color" by some. Today, he works with digital cameras and has been shooting botanical subjects. The "Hosta Project" has won numerous international awards and feature articles have been published about him in national and international publications. a Google search on "Russ Martin photographer" will turn up many articles. Recently, his pictures have been featured in the UK, Australia, and the USA. His flora images of hosta plants have won first place awards in the Prix de la Photographie, Paris, the International Photography Awards (The Lucies), and the International Garden Photographer of the Year.
Community
Comments
Catalog Details
Product No 5470682
Subjects Landscape, Street Scenes, Urban
Style Fine Art
Medium
Tags Martin, Russ, color, diner, manhattan, nyc, orange, red, square, vintage