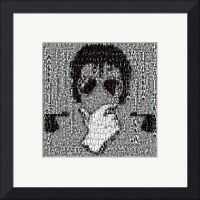 Availablity Usually ships within five business days.
Artist Paul Van Scott
Collection illusions
Description From a distance this looks like a great picture. Its actually 100s of mini-pictures. The mini-pictures are of Michael Jackson from all the stages of his career. This creates an illusion type image that is really two pieces of art in one. A collection of mini pictures up close and the big one from a little further back. This unique print is a true conversation piece. 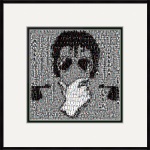 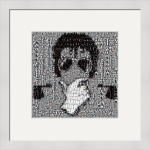 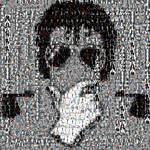 Paul Van Scott, Palm Bay
Member Since August 2009
Artist Statement PAUL VAN SCOTT specializes in the odd and unusual type of art. His focus is on optical illusions and art that can be viewed several different ways. His work has been featured nationally on the hit Fox television show 'GLEE', it has appeared in college textbooks and on outlets such as Coast To Coast AM, Grand-Illusions.com and TMZ.com, it has appeared as magazine covers and has been purchased by museums including the Daewoo Classic Car Museum California, The Rod Serling Foundation Twilight Zone museum and others. His art is owned by NFL Hall of Fame coaches and has been requested by professional athletes, celebrities and mixed media/pop art lovers in over 20 countries! In 2007 he received a lifetime pass to the Baseball Hall of Fame in Cooperstown NY as thanks for items donated.
Community
Comments
Catalog Details
Product No 2268172
Subjects Celebrities, Composers, Famous Faces, Music, People, Pop, R&B and Soul, Rock
Style Contemporary
Medium
Tags 1980s, 80s, Paul, Van Scott