This 360° panorama was taken at twilight on the shoreline of Lough Foyle between the town of Moville and the fishing port of Greencastle on the Eastern coast of the Inishowen peninsula in County Donegal, Ireland. In the nineteenth century Moville was the final embarkation point for many emigrants who left this area for a new life in America.

The panorama is shown here using something called a “Stereographic Projection” which renders the 360° image as if the tripod was a low-flying helicopter and the horizon of the flat panorama was the edge of a tiny globe over which it flew as the globe floated in an encircling sky.

The panoramic image was created by combining 27 separate digital photographs covering every angle and with bracketed exposures. Hence the detail has been captured both in the brightest areas of the sky and in the shadows between the rocks. The photographs were shot under pressure as the tide came in, widening the gaps between the rocks on which the tripod stood.

This image also appears in a calendar available on the Cafe Press website.

Because of the way that it was created this is a very high resolution image (the equivalent of about 80-megapixels). It′s capable of delivering very fine detail even when printed at massive sizes.

At sizes up to 24″ square it will look good. At the larger sizes it is a real stunner! 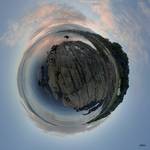