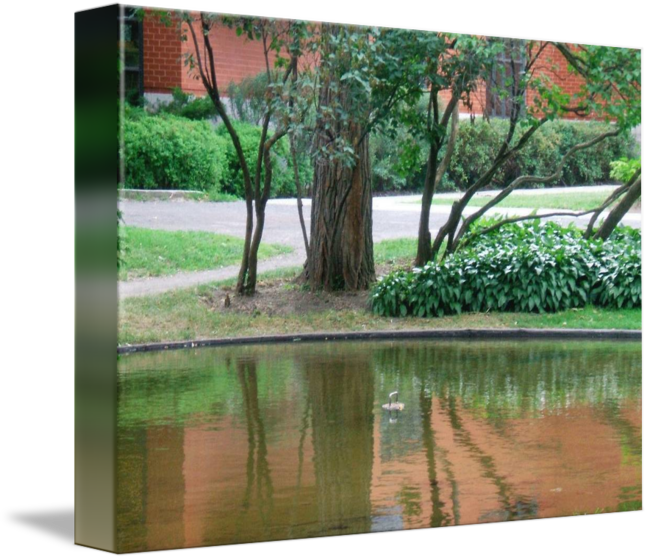 Availablity Usually ships within five business days.
Artist Kathleen Moore
Collection Country.in.the.City
Description Nothing delights me more than the infinite beauty of nature. The mingling of pine needles, oak and maple leaves, moss and blue-flowing waterfalls along this landscaped stream in Westmount Park, in the midst of the City of Westmount, Quebec, just took my breath away. And I hope it will yours, as you come for a walk... in the country... in the City.

This picture was taken on 23 June 2007. According to legend, the heavens were created first, and then the earth below, by reflection. The lovely rosey glow in this reflection is from the clay-brick walls of the Westmount Public Library, which overlooks the stream and the park from the northwest, near Sherbrooke Street.

Kathleen Moore, Canada
Member Since August 2007
Artist Statement My name is Kathleen Moore, and I am a Canadian poet, translator and photographer turned activist. I have a special interest in Constitutional law of Canada, and am preparing legal proceedings to halt the annexation of Canada to the United States and Mexico to form a continental union.

If you would like to support my research and legal preparations, which I am doing independently, you can do so by purchasing one of my "photo-paintings". NAFTA, the North American Free Trade Agreement, was not a trade agreement, but an early step in North American integration. This means nothing less than the complete destruction of Canada as a political and legal entity.

While I appreciate the terrific work being done by the many groups trying to raise social awareness of the impending forced unification of this continent, I have chosen to aim directly for those in Canada who are illegally causing it. Their attempts to attach Canada to the United States and Mexico are unconstitutional, illegal, and a violation of their oaths of office and allegiance, which in our law renders them self-discharged from office.

They are therefore conducting not political or trade business on behalf of Canada, but a coup d'etat on this country. In Canadian law, there is, fortunately, one person above government who is personally responsible for the abusive exercise of power, and that is the Sovereign.

By instituting proceedings in Habeas Corpus for Canada with Her Majesty Elizabeth II as the personal respondent, I intend to oblige a competent Judge to compel Her Majesty to come to Canada, and to stand on this soil and explain Herself.

Her Majesty is also bound by oath, a Coronation Oath, to govern Canada by our own valid laws. The so-called laws being cranked out by a rogue Executive to be rubber-stamped by our incompetent Parliament are not "laws". I am referring in particular to the so-called Clarity Act, which purports to be a "law" of Canada which provides a framework within which to "democratically" destroy this country.

This is fraud on the law and a Constitutional and Parliamentary coup. The royal assent conferred upon it by Supreme Court Justice Louis LeBel acting for the Governor General who represents Her Majesty is an absolute nullity. The Crown of Canada has no constitutional power to assent to any unconstitutional measure, let alone one concocted to attach the invaluable natural resources and territory of Canada by forced annexation into "North American Union".

I hope you enjoy your visit to my Gallery, and I invite you to enter either by the French or English door into my political web site, Habeas Corpus Canada, where you can find out a little bit about what's happening: