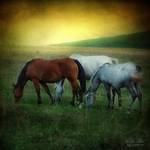 The imagined reflexions and magical realities of István Kádár, artist of three homelands, allows us entry into the world of an extraordinary planet. The photos are more than mere two-dimensional records of light-and-shadow, peculiar colours, and textures perceived during his real and imaginary travels. Captured in a "natural environment", yet exude an almost extraterrestrial feel. Dream and reality are unified in the artist's magical realist pictures. Perhaps this is beacause the thread of Istvan's life intertwines continents and also is embodied in tiny virtual worlds. Using his camera and Photoshop he manipulates his perceptions with ease; with him walking the dog on a normal day may seem like a Martian chronicle.
István Kádár was born in Sepsiszentgyörgy, Transylvania, settled in Canada at the age of 22 and studied graphic design in Toronto. In 1997 he moved to Budapest and spent 8 years as a graphic designer, then returned to Toronto in 2005.
Community
Comments
Catalog Details
Product No 2166578
Subjects
Style
Medium
Tags 3colours, Istvan, Kadar, bestofmywinners, bratanesque, erdély, horses, landscape, nature, romania, saariysqualitypictures, scenery, sunset, theunforgettablepictures, transylvania, vosplusbellesphotos