Availablity Usually ships within five business days.
Artist Roberto Ferrero
Collection wanderlust
Description Women of Otavalo in ethnic costume at the craft festival that takes place every Saturday. The city of Otavalo in Ecuador has the largest and most important craft market in South America.Analogic photography. 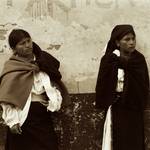 Roberto Ferrero, Finale Ligure Marina
Member Since July 2015
Artist Statement Maybe it was 1986 when they gave me the first camera, a shiny red Halina.
Since then I have started to look at the world through different eyes.
I still remember that a decade ago I had one of those tourist gadgets in the form of a toy camera in my hands that projects tourist images of a certain place in the optical viewfinder with each click. Surprising, it was love at first sight.
In 1988 I took it more seriously by attending the Italian Fashion photography school in Genoa. So my interest in photography began in the late 1980s with the magical and fascinating film development technique and black and white printing in the darkroom, to then tune in to new digital technologies.
I love to express my style also through the Holga toy camera and the pinhole camera, analog and not.
Over the years I have trained professionally following workshops with internationally renowned photographers such as Andreas Bitesnich, Mimmo Jodice and Kent Koberteen of National Geographic.
In 2000 I was awarded the first Pentax-Photo Italia prize.
I exhibited my images in the International Photography Center, Scavi Scaligeri, Verona.
Chateau de Bosses exhibition space in Saint-Rhémy-en-Bosses, Valle d'Aosta.
Ethnographic Museum, Pinerolo.
Fortress of Ghar El Melh, Tunisia.
INAIL, Roma
Rassegna dell'immagine di mare, Finale Ligure Marina.
I was actively present, with the collaboration of Tau Visual and the non-profit organization Rava-nph, on the occasion of the World Day of the Rights of the Child, at an important exhibition of "Immagini di bambini" hosted in the Galleria Vittorio Emanuele and at Castello Sforzesco in Milano.
Among my collaborations, the names of the paper company Fedrigoni, the Spanish marketing and services agency Promotor, Daimler Chrysler Jeep, Forces of the Order, Club de Musique, Focus English version, Touring Club and various catalogs, both collective and personal, stand out.
Community
Comments
Catalog Details
Product No 6544281
Subjects Ethnic Costume, Fashion & Clothing, People, Portrait
Style Fine Art
Medium
Tags Ecuador, Ferrero, Roberto, america, artigianato, craft, donna, human, otavalo, portrait, south, woman