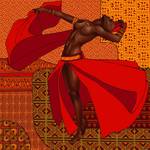 Francesca Resta, Provaglio d'Iseo (Brescia)
Member Since March 2009
Artist Statement Francesca Resta is an italian artist who works mostly with digital painting, she fell in love with this tecnique in the autumn of 2006; before this date she worked mostly with pencils and charcoals, as she studied during her years in the artistic high school of her city. Now she is attending oils lessons from the italian painter Giovanni Franchi, to extend her skills in this classical tecnique.

Her works have been displayed in several collective exhibitions: the illustrations made for the anniversary of the first edition of "Pinocchio" are still being displayed all around the territory of Brescia, she partecipated to an exhibition about "human rights" and to the most recent "I love beauty" held during all the month of March 2009 in the Santa Giulia Museum in Brescia.

"Pinocchio" - illustration for the 2nd chapter

The novel rewritten in the dialect spoken in Brescia, every chapter illustrated by a different brescian artist.

cover and back cover illustration