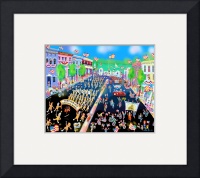 Availablity Usually ships within five business days.
Artist Michael Ives Platinum Member
Collection HOMETOWN
Description There's nothing quite like a parade. Especially if it's coming down Louisiana Avenue! We'd cover our bikes with red, white and blue cray paper and for that really cool sound, playing cards in the spokes and with our Davy Crockette coonskin tailed hats proudly blowing in the wind, head on our to be a part of this annual event.

Michael Ives, Coronado, California & Lanikai, Hawai'i
Member Since March 2007
Artist Statement Although expelled from Catholic School for being a 'wise-acre' and later receiving a D- in the only art class he ever took, Michael Ives has become recognized as a successful painter in oils, acrylic and watercolors, as a folk artist working in wood, a digital video film maker, song writer and most recently enjoys painting on his iPhone and iPad. He wears the mantle of 'Outsider' artist comfortably and tends to build his following of clients and collectors privately rather than through exhibits and organized shows. Michael's different styles and mediums used to drive galleries crazy because he would not settle into one proven and successful style. He enjoys portraying each piece with its own personality and technique.
He was born in a small town in Ohio and now works and divides his time between Coronado, California, Tucson, Arizona and Lanikai, Hawai'i with his wife Jill. Traveling is a big part of their lives and Michael carries a small studio with him and insists he does some of his best work as impromptu, quick sessions on site where he can put the serious 'studio' work aside and not worry about technique.
He speaks to art classes and groups about the creative process and the 'Leaps of Faith' that all artists must take along the way to reach their potential.
You can view Michael's art here on ImageKind.com and also on his Independent Website, www.ivesart.com.
Community
Comments
Catalog Details
Product No 5753356
Subjects Children, Décor, Holiday, Memorial Day, Military & War, Places, Uniforms, United States
Style Folk Art
Medium
Tags Ives, Michael, Midwest, art, bands, colorful, holidays, hometown, ipad, ives, ivesart, michael, ohio, parade, perrysburg, soldiers