This 360° panoramic image was shot in Derry‘s Guildhall Square on the first Saturday of the month in September 2008, whenthe local street market known as “The Walled City Market” was taking place.

On one side of the square stands the distinctive gothic-style sandstone building known as the “Guildhall”. It serves many civic functions, including housing the Council Chamber in which Derry City Council meets, and the Mayor‘s Parlour, where the Mayor receives and hosts visitors.

The Guildhall opened in 1890 after the original town hall in the Diamond - the centre of the walled city - was burnt down. On the other side of the square are the historic city walls. They date from the 17th century and are amongst the last entact city walls in Europe.

The panorama was created by combining 27 separate digital photographs covering every angle and with bracketed exposures. Hence the detail has been captured both in the brightest areas of the sky and in the shadows inside the stalls.

There are two versions of this panorama here. One has the sky on the outside and one has it in the middle which do you prefer?.

Because of the way that it was created this is a very high resolution image (the equivalent of about 80-megapixels). It is capable of delivering very fine detail even when printed at massive sizes.

At sizes up to 24″ square it will look good. At the larger sizes it 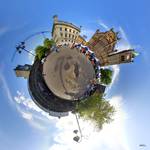