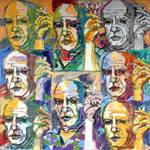 David Noah Giles, Seattle,WA
Member Since October 2008
Artist Statement I was born in New York City . My mother and my aunt were both aspiring artists and studied at the Brooklyn Museum School. They introduced me to impressionist painting and various other modern art movements when I was a child. My mother influenced me by taking me to all the art museums in New York City .When I was 11, at summer camp I painted sets for a production that was overseen by Earl Robinson, composer of Ballad for Americans. At age 15, I studied art privately in Queens NY with Lillian Schwartz who encouraged me to notice my natural talent as a painterly colorist. While at Russell Sage Jr High I took art classes and continued to follow through with my interest in drawing and painting at Forest Hills High School.
In 1969 I entered the BFA program of the State University College at New Paltz. The campus is ninety miles north of NYC in the Hudson River Valley. It was known at that time for the art education program. My most profound influence at the college was a drawing and painting instructor named Alex Minewski. Mr. Minewski studied with Hans Hoffman in NYC and with Nicolaides, the author of The Natural Way to Draw, in Paris. He imbued me with an unflinching determination to develop and trust my own vision of art. In 1973 I was awarded first place in an undergraduate show juried by Alan Frumkin owner of a well known 57thstreet art gallery in Manhattan.
In 1974 I moved to the San Francisco Bay Area. There I discovered a city surrounded by the dramatic natural beauty of the Pacific Coast. It possessed a magical atmosphere that had obvious influences of the Beat and Hippie movements. The poetry readings and vibrant music scene were invaluable sources of inspiration. The Bay Area afforded rare chance meetings with people I admired such as Robert Rauschenberg and Imogene Cunningham.; I attended figure-drawing classes at the San Francisco Art Institute and continued to paint in my inimitable style of Figurative Expressionism. I worked as an artist’s model at City College of SF, Santa Rosa CC and also painted houses to support myself. I devoted as much time to painting as possible. I often hung out in North beach cafes where I sketched the local characters. In addition I filled my sketchbooks with colorful non-objective drawings where the harbinger of the next phase of my imagery was developing. By 1981 I was painting almost exclusively non-figurative. My way of painting continued to develop into grafittiesque and geometric movements. I built my own lexicon of form and color.
In 1990 I moved to Washington State. In my 1st Imagekind Gallery I am featuring my Portraits of Artists and Musicians that are personal favorites.
Community
Comments
Catalog Details
Product No 1496466
Subjects Artists, Famous Faces, People
Style Portraits
Medium
Tags David Noah, Giles, Modern Master, cubism, genius, picasso