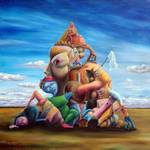 Alex Lavrov, Vancouver
Member Since January 2015
Artist Statement Alex Lavrov was born in 1981 in a Southern Ukrainian city named Simferopol, close to The Black Sea. He grew up in the Eastern European slums , going to school , playing with other children and doing things that kids usually do. When Alexander got older, he became more interested in the arts , and so at the age of 16 he went to study art at Samokish Art College.
In 1999 Alex had a chance to immigrate to Israel where he continued
to develop his creative potential while supporting his livelihood.
Among various official and unofficial art classes and courses he
attended , was also Tel-Aviv School of 3D Design and Animation,
from which he successfully graduated in 2006.
In 2007 Alex moved to Vancouver, Canada, where he currently
lives and works.
Throughout his short art career he has participated in large
and small art exhibitions in both Israel and Canada.
Community
Comments
Catalog Details
Product No 5534201
Subjects Architecture, Fantasy Architecture
Style Surrealism
Medium
Tags Alex, Lavrov, Philosophy, cubism, expressionism, humor, imaginative, pyramid, structure, surreal, whimsical, wiggly