Availablity Usually ships within five business days.
Artist Ulises Toache
Collection landscapes
Description Ulises Toaches body of work is formed by a gamma of rich but subtle acrylic, collage, encaustic and oil mixed media diffused and arranged on canvas and wood panels to suggest the presence of fantastic yet strangely familiar images. His remembrance of mysterious and almost obscure traditions followed by the majority of Mexico, as well as centuries of senseless columbine impositions, provoke an itch for discovery. This integration results in a search for that mythical solitude that does not confine but intrigue the viewer like a sudden encounter with a fond forgotten memory, blurring the line between the habitual and the remote almost as mocking the chaotic yet worn pace of his native Mexico Citys life and still finding his seat in cozy halls of the traditional.Ulises Toaches works prompt a visual experience to the individual that is comfortable, but set in a radical environment. After all, what is an Artist to do but to share a [visual ] influence that, ultimately, will change the way the world looks at life. 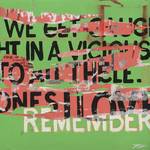 Ulises Toache, atlanta, ga
Member Since July 2011
Artist Statement Ulises Toache began his early artistic career at age ten when his father let him paint a mural in a wall of their two bedroom small condo. A few years later, still fascinated by the striking force of visual expression, he began painting concert announcements on small billboards and walls for a local radio station. At the age of eighteen, he joined the National Institute of Fine Arts in Mexico City for his first formal training in color and form. It was there where he solidified his ideas of dedicating his life to art. He came to Atlanta in 1992, joining The Perrin’s Center for the Arts as an assistant- apprentice then later freelancing and selling his paintings through them. He has also worked in close conjunction with renown national artists like Heung Chung, Don Haugen and Tina Stern. Since 1995, Toache’s creativity  lead him to work on a variety of projects ranging from stage designer to coordinating creative advertising projects for The United Way, March of Dimes and other fund raising organizations, allowing him to gather experience, expand his creativity and focus on a more concrete style for his paintings. Ulises Toache has participated in several Gallery exhibits throughout the Atlanta area  including Darius Gallery, Rustique, Stanton, Henson & Henson and Carolina Fine Art as well as creating a series of commissioned paintings  for Paramount Pictures Corporation, the Ritz Carlton, McAlpine Booth and Ferrier, benecki fine homes and custom works for multiplatinum selling artists. His works have been shown in Atlanta homes and lifestyles magazine among other publications. The demand for Ulises Toache’s work has kept him very active showing and selling his art in  Atlanta, Baltimore, Dallas, New York, Berlin and London creating fine art and murals for many galleries, large scale design firms and other companies.
Community
Comments
Catalog Details
Product No 4065457
Subjects Abstract, Collage, Color
Style Abstract
Medium
Tags Toache, Ulises, collage, contemporary, dadaism, emerging, graffiti, media, mixed, modern, poster, urban