Availablity Usually ships within five business days.
Artist Jim Bavosi Platinum Member
Collection Abstractll
Description Enhanced photograph from part of the 'The Spirit Of The Marathon' sculpted by Mico Kaufman. As the winner of the 50th Boston Marathon, Kyriakides used his triumph to draw attention to the plight of his war and famine-ravaged homeland following World War II. Emaciated and having narrowly escaped execution during the Nazi occupation of Greece, Kyriakides hadn't raced in six years when he came to Boston in 1946. Despite being told by doctors in Boston that he shouldn't run, Kyriakides ended up recording a mythic performance, defeating defending champion Johnny Kelley. With victory as a public platform, Kyriakides then went on to serve as an unofficial ambassador for his country, raising money for reconstruction and strengthening international ties between the United States and Greece. 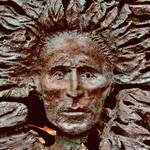 Jim Bavosi, Grafton
Member Since October 2008
Artist Statement I have been involved with the camera since the late '60s. I received formal photographic training while at SMU in the early '70's. For a short time after college, I had a studio. After that, I was away from the hobby for some time. Earlier this decade, I rediscovered my passion for it once again. As with most of my interests, I became involved in a big way. I have over 1400 images posted to IK. I welcome all communication. I feel humbled to be surrounded by so much talent. I can't seem to focus on any one style or theme. I guess I will shoot anything...for now anyway.