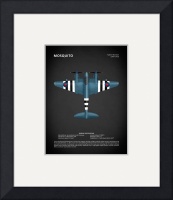 Availablity Usually ships within five business days.
Artist Mark Rogan Platinum Member
Collection Aircraft
Description The de Havilland DH.98 Mosquito is a British twin-engined, shoulder-winged multirole combat aircraft, introduced during the Second World War. Originally conceived as an unarmed fast bomber, the Mosquito's use evolved during the war into many roles, including low- to medium-altitude daytime tactical bomber, high-altitude night bomber, pathfinder, day or night fighter, fighter-bomber, intruder, maritime strike, and photo-reconnaissance aircraft.Invasion stripes were alternating black and white bands painted on the fuselages and wings of Allied aircraft during World War II to reduce the chance that they would be attacked by friendly forces during and after the Normandy Landings. Three white and two black bands were wrapped around the rear of a fuselage just in front of the empennage (tail) and from front to back around the upper and lower wing surfaces.