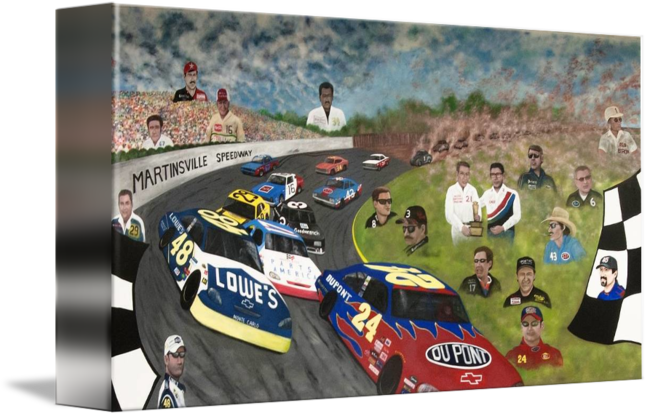 Availablity Usually ships within five business days.
Artist Charles Hill Platinum Member
Collection Portraits
Description This is a section of my Dust to Glory mural of the history of the Martinsville Speedway that I painted in the Jim Mills Dodge car dealership (now Blue Ridge) in 2011 and 2012. I painted the mural in acrylic on the wall of the showroom using a scissor lift. It is nearly 80 feet long and 20 feet high, and there are over 80 portraits of NASCAR drivers in the mural spanning from the winner of the first race to today's top drivers. I also included the Famous Martinsville Hot Dog Stand, and portraits of the founders of the track, Clay Earls and Bill France, and the current president Clay Campbell. I painted the mural while I completed my Masters of Mathematics education.

Charles Hill, Martinsville
Member Since November 2016
Artist Statement My name is Charles Hill, and I have been creating art for over 45 years. At the age of 27, I began to paint full time, and in 1992 I became an Artist-In Residence in Danville Public Schools in Danville Virginia, where I taught art classes in numerous primary schools, as well as creating artwork that supported the regular classroom teachers. During this time, I also began to paint large scale mural projects in numerous schools that were based on the SOL's that were being taught in these schools. I continued as an Artist-In-Residence for 14 years until I returned to college at Averett University in 2006 to pursue a degree in mathematics. I have always considered mathematics as another art form, and I have been studying and working with mathematics recreationally as long as I have been painting. I also obtained a Masters of Mathematics degree from Averett in 2014, and I have taught high school mathematics since then. I have also completed numerous mural projects over the last 15 years in churches, businesses and homes, as well as illustrating magazines, and painting furniture for a small manufacturing firm. I paint realistic, surrealistic, and abstract oil and acrylic paintings, as well as realistic pencil drawings that are mainly portraits. I create both commercial and fine art, and I specialize in murals, portraits and landscapes that often have a mystical focus and atmosphere.
Community
Comments
Catalog Details
Product No 6621666
Subjects Automobiles and Trucks, Transportation
Style Portraits
Medium
Tags Arrington, Charles, Hill, Jr., Waltrip, allison, antique, auto, automobile, automobiles, autos, bobby, brothers, buddy, byron, car, cars, checkered, dale, darrell, davey, delano, drivers, earnhardt, flag, glen, gordon, hensley, jeff, jimmy, johnson, kyle, lee, leonard, mark, martin, martinsville, nascar, petty, race, racetrack, racing, red, richard, rusty, scott, speedway, wallace, wendell, wood, woods