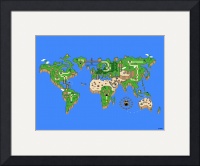 Ian Gibson, Bristol
Member Since July 2011
Artist Statement Ian Gibson was born in Belize City, Belize.
He's been drawing religiously for as long as he can
remember, and first made a name for himself
illustrating children's books in Belize. He graduated
from the Savannah College of Art and Design in Savannah,
Georgia, with a Masters in Illustration in 2008. He
moved to Bristol, England, in 2010 and has been
freelancing as an illustrator ever since, primarily
working on graphics for mobile phone games, web-comics,
and other commissions that come his way.