The Undertones are probably the best known little rock band to come out of Derry during the late 1970s punk era. Their hit “Teenage Kicks” was famously touted as his “favourite record ever” by influencial DJ John Peel. Four out of the original five members reformed the band in November 1999 with Paul McCloone filling the fifth spot as lead singer. Since then they have undertaken tours of the UK, Ireland, Europe and North America.

This 360° panorama was shot just as The Undertones played “Teenage Kicks” as the big finale to their concert as part of “The Picnic in The Park” organised by the Friends of Brooke Park on 4 th August 2007 in Derry.

Although it had drizzled a bit, earlier in the afternoon, the rain held off throughout the hour or more for which they played. They even sang “Here comes Summer” without fate's sense of irony intervening.

This panorama was created by combining about a dozen separate digital photographs. They were shot in the middle of the crowd without the usual tripod. Camera held at arms length above the photographers head I rotated slowly taking photographs in each direction.

Because of the way that it was created this is a very high resolution image (the equivalent of about 80-megapixels). It's capable of delivering very fine detail even when printed at massive sizes.

At sizes up to 24″ square it will look good. At the larger sizes it is a real stunner! 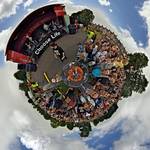