Availablity Usually ships within five business days.
Artist Lisa Lu
Collection Watercolors
Description Watercolor 11'x11'; The Wawel Castle constitute the most historically and culturally important site in Poland. For centuries the residence of the kings of Poland and the symbol of Polish statehood, During the early 16th century King Sigismund I the Old and his wife brought in the best native and foreign artists including Italian architects, sculptors, and German decorators, to refurbish the castle into a splendid Renaissance palace. In the fire of 1595, the northeast part of the castle burned down. King Sigismund III Vasa rebuilt it. In 1609 King Sigismund moved the capital to Warsaw. After World War I, the authorities of the newly independent Polish Second Republic decided that Wawel Castle was to become a representative building of the Polish state and would be used by the Governor and later by the President himself. In 1921 the Polish Parliament passed a resolution which gave Wawel official status as the residence of the President of Poland. Following the ravages of World War II, by the decree of the State National Council, Wawel Castle became a national museum.The Sigismund Tower, originally a defense tower, it was reconstructed as a bell-tower in the 15th century. At that time it was lower and housed four bells. In the 16th century the tower was raised when the Great Sigismund Bell was made. 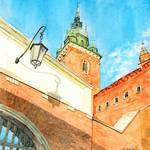 Lisa Lu, State of Washington
Member Since March 2009
Artist Statement Lisa first started painting with color pencils at the age of 10, and she has always loved to paint ever since; it allows her to express feelings with a peaceful mind. Self-taught and self-developed in watercolor and ink painting, each of Lisa's painting is a journey to adventure. Lisa presently resides with her husband and their son in the State of Washington. She is a licensed architect, and currently works in an architecture firm, while continuing self study and painting on architecture and landscape subjects in watercolors.
Community
Comments
Catalog Details
Product No 5352020
Subjects Architectural Elements, Architecture, Landmarks
Style Drawing
Medium
Tags Lisa, Lu, Sigismund-Tower, Wawel-Castle, architecture, brick, historic-landmark, krakow, poland, renaissance, watercolor