Availablity Usually ships within five business days.
Artist Donald Thornton
Collection PrinceTributeArt
Description This is an original Art Piece designed by Don Thornton aka, 'The Art Angel Don' depicting his interpritaion of a paradisal quest to help promote 'Global Peace, Love & Unity' through the visual arts. 'The Art Angel Don' is a formally trained graphic designer who majored in 'Fine Arts' in college and has persued 'Graphic Design' over the years throughout the nation. Currently 'Don' is the Sr. Art Director and a Marketing Consultant for the 'Jackson Family Foundation' and has been creating works for the JFF ever since the tragic passing of 'The King of Pop', 'Michael Jackson', June 25th, 2009. Learn more about 'Don's' works at. www.DonaldThornton.com. 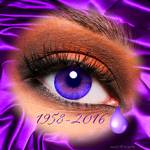