Availablity Usually ships within five business days.
Artist Burnell Yow!
Collection MandalaArt
Description Features the Yin Yang symbol and the Japanese symbol for Harmony.Original mandala designs created by intuitive artist Burnell Yow! of Raven's Wing Studio. Through an elaborate muti-step process beginning with the photographing of actual textures and patterns around his native Philadelphia, Yow! has created a series of stunning mandalas for your enjoyment. 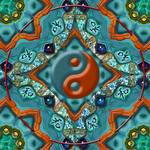